While recently awaiting the arrival of a new baby, Elizabeth Dacey-Fondelius found herself not so much restricted by her bulging belly as by the opinions of those around her - especially when it came to alcohol consumption.


Cultural taboos vary from country to country, yet you’d think that medical advice would be internationally uniform. But it’s far from uniform, and nowhere near in agreement especially when you mix pregnancy, breastfeeding and alcohol. While all experts have access to the same research and studies, different countries interpret and advise based on culture and political whim.


Zero tolerance for alcohol has been the general norm here in Sweden for quite a while. Americans take it to its most extreme with no-go zones condemning not only alcohol and smoking but all forms of caffeine. Coffee, cola and even chocolate are off limits to the mother-to-be. Until recently moderate alcohol consumption was okay for pregnant and breast feeding mothers in the UK.


However, the new advisory of zero tolerance for mothers has recently stirred up controversy in Britain. I sympathize with the mums like Zoe Williams who wrote a great piece in the Guardian. I agree strongly with her that much of the popular advice to pregnant women is unnecessarily restrictive.


The strict alcohol consumption guidelines set up by Swedish, UK or US health care authorities, agencies and associations all share the aura of scientific and medical credibility. However, a study in 2006 by the British Journal of Obstetrics and Gynaecology concluded that there was no convincing evidence of adverse effects of prenatal alcohol exposure at low to moderate levels, where moderate was defined as 10.5 units per week (not at one sitting). (Fetuswinning here: 10.5 units a week = 1.5 units a day. A unit is 1 beer. Sticking with beer, so, would you say, drinking gals, that you would drink the equivalent of 1.5 beers every day until your child is born? Doesn't that sound at all dangerous?)


Messages to eliminate all alcohol are purely motivated by the true danger of a fetus’ exposure to high levels of alcohol which results in Fetal Alcohol Spectrum Disorders (FASD).


In my first pregnancy I thought I’d be upfront and honest. I had every intention of abstaining from alcohol, however I would sporadically partake of the grape should the occasion call for it. Instead of the midwife applauding me for my prudent response from a responsible mother-to-be, she started rambling off medical studies linking alcohol to pretty much anything that sounded even remotely scary.


That’s when I decided to play it safe from there on in and answer when asked how much I drink: “I abstain totally from any alcohol intake under any and all circumstances while pregnant and breastfeeding.” (fetuswinning here: it is important to know here that studies are always evaluated by the given numbers even though it is true that not all women tell the truth (above) about consumption. There is a tendency to under-report volume of alcohol consumption. Some don't want to look bad, even on a piece of paper in a survey.)


In 2005, the Surgeon General, Dr. Carmona, urged “Women who are pregnant or who may become pregnant to abstain from alcohol.” If you take that literally, you are talking about every woman of child-bearing age. (fetuswinning here: True, but if you are celibate, don't worry. It's just that with sexually active women, it would be a good idea practice "a pregnancy strip detail,  as in army detail. Must be done.)


In Sweden they add guilt to the fear using the zero tolerance argument, “You wouldn’t drive a car after drinking a glass of wine because your judgment is impaired; think of the bad judgments you could make to put your unborn child at risk.” It makes me wonder how anyone allows me to make any decisions on my own at all.


How do you decide how much is too much and how little is harmless? I don’t have the answer, but a pregnant friend living in French-speaking Switzerland told me that the literature she read in French advised women to not have more than one glass of wine per day. Perhaps that’s too liberal for the zero-tolerance brigade, but something to keep in mind when "weighing" “medical advice”. (fetuswinning here: "weighing"? That's ambivalence - make a decision - tip the scale. Tip it towards the evidence of danger.)

Some of E's Resonses


I don't know why someone in Sweden would complain about this kind of attitude.


A person who enjoys the benefits of a government-run health care system has no reason to complain when they find themselves under constant pressure, criticism, etc. about the decisions they make that affect the health of themselves and others.


I asked my OB/GYN what he recommends, just out of curiosity, and he said he tells his patients they can have a couple glasses of wine a week.


Coffee, cola and even chocolate are off limits to the mother-to-be.

I cannot function without Diet Coke, and I am not ashamed to admit it. (fetuswinning here: Rigorous honesty - that's what we need.)


Heh, I’m not even pregnant yet and I’ve been trying to cut the caffeine way back... it’s really hard. Diet Coke makes the world start.


On the other hand, if you can’t give up alcohol for nine months when you know you’re pregnant it seems to me like there’s an alcohol issue.

“Zero tolerance for alcohol has been the general norm here in Sweden for quite a while. Americans take it to its most extreme with no-go zones condemning not only alcohol and smoking but all forms of caffeine. Coffee, cola and even chocolate are off limits to the mother-to-be.” 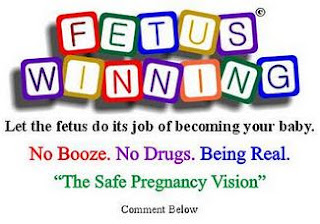